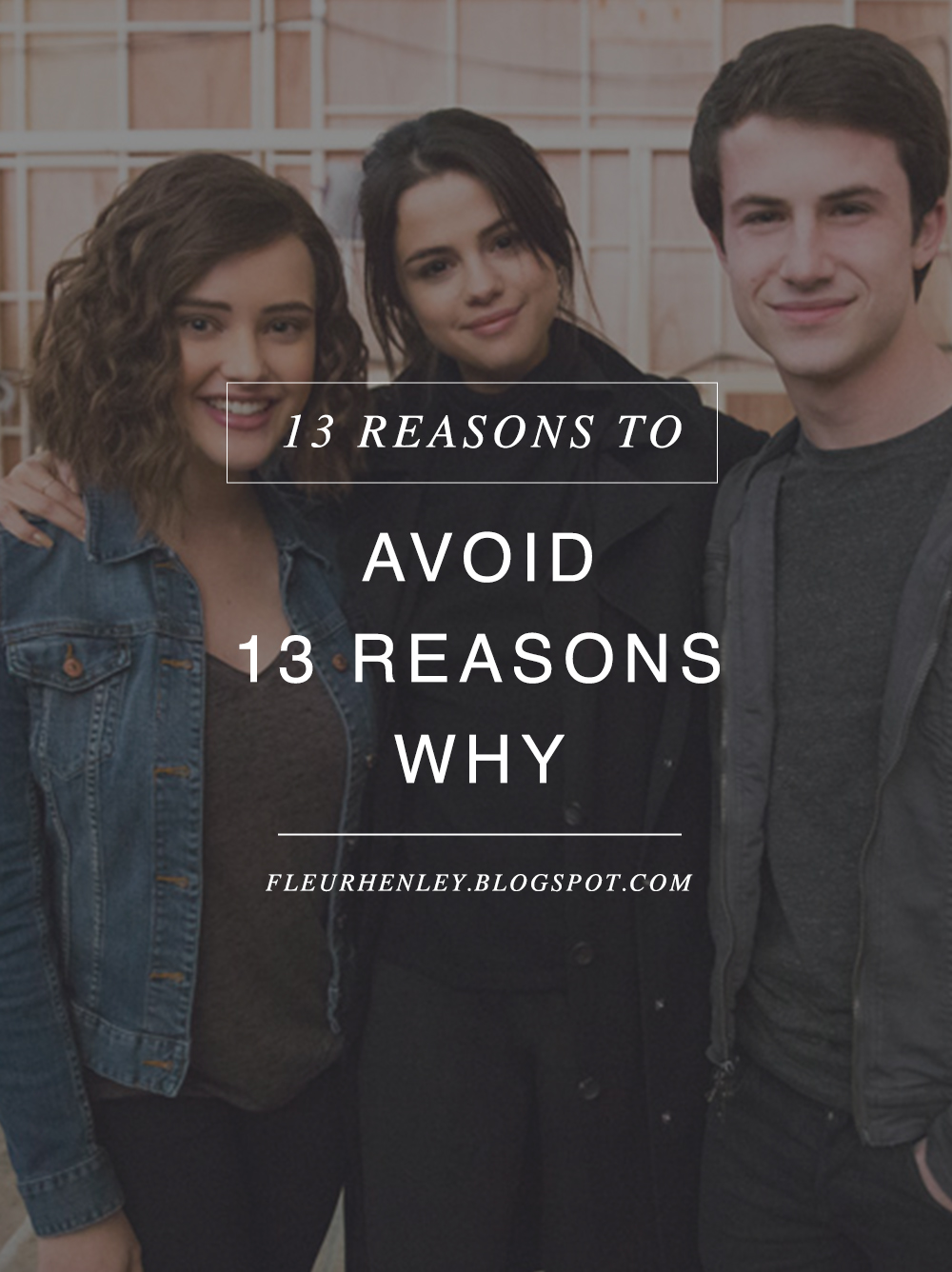 I was going to call this something like 'Why You Shouldn't Watch 13 Reasons Why' or '13 Reasons Why Is A Dangerous Show That You Should Avoid At All Costs If You Suffer From Depression, Know Your Limits' but they don't flow as well as my current title does. Also, I'm discussing an important matter in this post and so to spread the message a little bit better, the title needs to be as click baity as possible.

What I want to make clear, is that I have read the book but I have not read the show. I just thought that since everyone was getting so excited about the show, now would be a great time to point out some of the disturbing problems that the book and I'm sure the tv show, has. I also want to point out, that I have seen some clips of what goes on in the tv show, but please feel free to correct me if I mention them and I've gotten the context within it wrong.

To fully understand why this show isn't the advocate for mental health that it pretends to be, I'm going to start off with some of my personal reasons and then move onto elaborating on professional opinions. Please keep in mind, that I am not a professional myself, just someone who knows first hand what depression is like.

Some personal issues that I have with 13 reasons why.

I know that Tyler was a terrible person. It's disgusting how he stalked Hannah outside of her window without her consent, but sending his underage nudes to everyone (ones that he didn't even take) and bullying the hell out of him isn't going to magically make him a better person. Yet, that's exactly what Clay did. Hold on a second. I thought alongside everything else, this show was supposed to be helping us understand that bullying is bad – but it's okay when the main character does it? Seeing as how we are effectively the 'main characters' of our own lives, it just looks like another way people can excuse themselves when they bully someone else.

People In Charge Not Taking Care

I'm speaking about this article where a writer of the tv show for 13 Reasons Why explains why they made the decision to film the suicide scene. Sure it might have helped him, but what about the thousands of other people that it could potentially harm instead? Suicide is a dangerous topic to talk about in the media, especially when more often than not, discussing it in the media increase contagions (see below) so surely when people's lives are at risk, it's better to look at the bigger picture?

The Focus is Wrong

While it's true that focusing on Hannah might cause some problems as mentioned below, it certainly doesn't help that we're seeing this through Clay's eyes. Rather than focusing on the girl who is struggling with depression, we focus on the man pain of a boy who wasn't able to save a girl that he loved. I'm sorry, but the pain that he feels is not the big issue here.

This show tries to deal with a lot of issues, which in some ways is admirable. However at the same time, it is also overextending itself which means that they will undoubtedly skim over some important things. I know that this was originally going to be a movie starring Selena Gomez, which would have been even worse, but just because it's comparatively better doesn't mean that it's good. There are so many terrible things that happen in the story, only dipping into certain issues doesn't give them justice.

The Guidance Counsellor is Terrible

This just adds to the trope that is already overplayed in the media. Therapy should be something that people who suffer from depression should be going to, having the 'therapists are useless' ideology in the show turns people off actually going to get the help that they need. Ultimately, the counsellor was also a huge part of why Hannah committed suicide, which also adds to the fear. People don't want to get worse, and now they're worried that if they do go to someone with their problems, they might just get worse.

Another way to refer to this is 'copy cat' suicide. When people know that others have committed suicide, and then see them getting 'praised' or getting attention – it almost inspires people to carry out something that they may have been thinking about for a while now. While the statistics may be small, we have to remember that we are talking about other people's lives and no number apart from zero, could ever be small enough in relation to people who have committed suicide.

mental health foundations are receiving calls from ppl whose mental health was harmed by graphic 13rw scenes this is NOT good representation pic.twitter.com/gtx1PIR2w9
— sami (@ezekielfiguero) April 19, 2017


It glorifies having someone to blame

Other people can help but when you suffer from depression, a great deal of the power is in your hands. You cant rely on other people to drag you out, you need to take some responsibility for yourself as well. Therapy can help, but only if you're a willing participant.

Things over 50 research studies say that you should not do as per this article but the show does anyway.

If you're interested in the definition of sensational, as per google it is an adjective that means 'causing great public interest and excitement'. Oh wait a second, it's trending on twitter. People are making youtube videos, and blog posts talking about how 'good' it is. Huh, looks like the show completely ignored the professionals on this one. Oh yeah, it's also a tv show which means that if people weren't talking about it, the show wouldn't do very well. Maybe it people taking about the show wouldn't be such a big deal if the suicide was handled a little bit better, but it wasn't.


@ezekielfiguero To those calling us "too sensitive", it is LITERALLY the media's role to affect its audience. Those effects are not 100% predictable.
— Jingles♪ (@JinglesPigtails) April 19, 2017

Don’t talk about the contents of the suicide note, if there is one.

In doing so you remove one less obstacle in committing suicide. Sure it might not seem very much, wondering about what to put on a suicide note, but for some people the tiniest things can be the things that are holding them back. It could be the old lady down the street who needs help with her washing, it could be a worry about who's going to feed the fish when they're gone or it could be indecisiveness. People often don't know why they feel the way they do. Having a suicide note put into words and handed to them is dangerous and let's be honest, the entire book / show is a suicide note.

In the book, this appears to have been done a lot better. However in the tv show, they show the suicide in graphic detail which is not only disturbing, but could also be seen as a how to guide for struggling teenagers.

Don’t speculate why the person might have done it.

There's no escaping the fact of the matter, a great deal of the show / book focuses on Clay. Therefore, there is no plausible way that he could know exactly why Hannah committed suicide which then leads to speculation – this opens up the conversation for people struggling. They begin to see themselves in the reasons, and when they realise that the way that Hannah dealt with it was through committing suicide . . . it really doesn't help them or their mental health.

Describe suicide as “died by suicide” or “completed” or “killed him/herself,” rather than “committed suicide.”

Just stick to one term. Completed makes it sound like suicide was endgame. Died by suicide makes it seem as if it was an accident, or that one day they just randomly committed suicide etc.

I do have to admit, the way in which the suicide was depicted was terrifying and really got under your skin is something that is helpful in showing how terrible suicide can be, however it is also extremely triggering to people who suffer from depression. Throughout the book, the entire focus is on feeling bad for Hannah. On Clay's man pain that stems from him not being able to save Hannah. This is dangerous. More than anything, most people who suffer from depression want others to understand them (or at least that's how I felt). Having an entire show based on how bad people feel after someone has committed suicide, and then showing those people beginning to understand the person who committed suicide doesn't dissuade people from committing suicide. Quite the opposite in fact.


+ One bonus point that Anisha, my friend who has actually watched the show, wants to point out.

The show can't really be called an advocate for mental health, because it's rarely (if ever) mentioned in the show.  It lets people assume, instead of telling them straight out. This would be fine if it was a thriller, or a show that wanted to keep you in the dark with one of those mind warping endings, but it's not. It's a show that deals with suicide, and people need to know. PS THIS IS NOT MY FRIEND ANISHA, IT JUST SUPPORTED MY POINT!


@kellc_ @ezekielfiguero @reynarellans mental illness hasn't been mentioned once on the show, they should start by actually mentioning it
— re (@pissfed) April 19, 2017