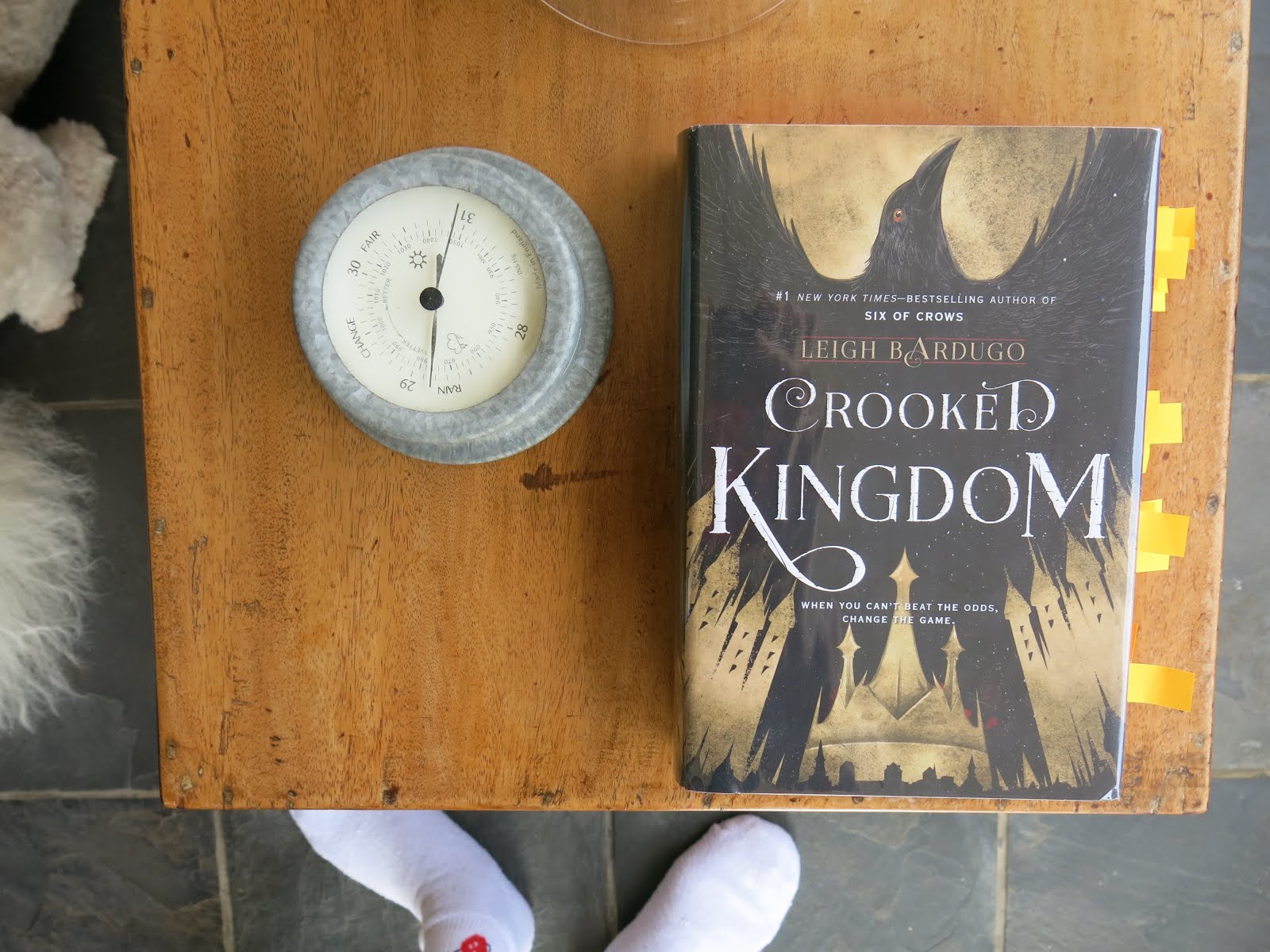 I’m sure you’ve heard of Crooked Kingdom. If you haven’t, then I’m sure you’ve been living under a rock (no offence meant to people who do actually live under rocks *cough* patrick star *cough). It’s basically a sequel to arguably one of the most hyped up young adult books of the past two years. It deals with gangs, murder and daring heists that no one in their right mind would even try and pull off let alone succeed at. Yet, the characters in the Six of Crows managed it. Unfortunately one of their members got kidnapped in the process. This is their struggle of both getting her back, and getting a little bit revenge along the way.

Coming out of this book, I have to admit that Wylan is my favourite character. In this book, we get a little bit of his backstory and watch him grow from a hopeful little boy, into a self sufficient man. I’m not going to spoil the ending for you, but I’ll let you know that I was really quite happy with the way that most things turned out. Sure there were some bits that I had an issue with (although my opinion might be a little controversial), but the way that we got to understand Wylan a little better, wasn’t one of them. In Crooked Kingdom, we watch him face hardships and persevere through them all – yet he still manages to keep his innocence from the first book.

Until this moment, Wylan hadn’t quite understood how much they meant to him. His father would have sneered at these thugs and thieves, a disgraced soldier, a gambler who couldn’t keep out of the red. But they were his first friends, his only friends, and Wylan knew that even if he’d had his pick out of a thousand companions, these would have been the people he chose.

Another person who had a huge growth spurt (maybe quite literally), was Matthias. Now there was an obvious reason for this, but to tell you that would mean me having to spoil some of the book for you. I will let you know, that I wasn’t very happy with it though. It just didn’t make all that much sense! Anyways, back to his growth. We get to see him have deep conversations with himself in the form of inner monologue. Often he questions his existence, on whether what he’s doing is right or if he’s just deluding himself. It’s refreshing to have these kinds of thoughts running around the pages, because it gives a very human aspect to the characters, rather than just shoving the idea that badass people aren’t capable of fear, down our throats.


The Cameos (SPOILERS IN THIS SECTION)

I was ecstatic when we stumbled upon Zoya, Genya and Prince Nikoli Sturmhond. It was such a nice little nod to the first series, as well as a good way to catch the readers up on everything that was happening back there. They retained their original characters throughout and as always, Genya was an absolute darling. She was so helpful to the crew, without asking anything in return (which surprised them, I’m sure). She still does have her scars, as expected, and Bardugo didn’t shy away from letting us know that. Zoya was badass and bossy as usual. Seemingly the leader of the group (or at least it seems that way to the majority of the crew), she takes charge and manages to boss the crew around quite well. Prince Nikoli Sturmhond was lovely to have around as well – he brought along a good deal of wit with him, and it was amusing to watch him and Kaz in the same room as each other. It’s an odd mix. On one hand, Prince Nikoli Sturmhond is a cheerful, happy go lucky guy while Kaz is a sour, downhearted crew boss. Interesting indeed.

“You can’t expect the king to participate in an auction like this himself.”
“Why not?”
“Because he might lose.”

I have been waiting AGES for this. Half of my life has just been sitting waiting for this very thing to occur! Maybe that’s a little bit of an exaggeration, but you get my point. So what is this marvellous thing that occured? Why it’s the progression between Jesper and Wylan of course. It was a slow burn for the entirety of the first book, and for a great deal of the second book, but we have signs! We have action! For all of you who wanted me to say the relationship between Kaz and Inej, I’m sorry! I’m just not feeling it as much as these guys. I mean come on, Wylan’s my favourite character so OF COURSE I have to choose the ship with him in it. It’s only natural.

“Jes, I’ve thought about this–“
“Thought of me? Late at night? What was I wearing?”

As expected, the relationship comes with all the good and the bad. Along comes Jesper with his stunning wit and gambling problem. Then there’s Wylan with his parental issues and brilliant mind. Honestly, they make the perfect pair. The scenes between them were so adorable, as was the concern that they each had for each other. They were thinking about the other, even when they weren’t together on a mission which was just the cutest thing. It was so lovely reading about something positive that had come out of all of this mess. They even drag each other out to deal with family issues! #domesticbabes

As per usual, Bardugo has crafted a story full of twist and turns. She keeps us guessing throughout and manages to one up us numerous times, just when we think we’ve figured out what’s going on, she pulls the carpet out from under our feet. This is what I loved so much in the first book. It was what made me come back for more. The dialogue was chock full of sarcasm and wit from nearly all of the characters, yet she managed to create a 'personal brand' of sass from each character. Jesper was the handsome rouge who acts like he doesn’t care but really does, Wylan was the adorable little bean who would get chuffed when he thought of something clever, but didn’t want to admit it. Nina was the queen of sass who walked and talked like the owns the place (all of the places) and . . . need I go on?

“People point guns at each other all the time in Ketterdam. It’s basically a handshake.” 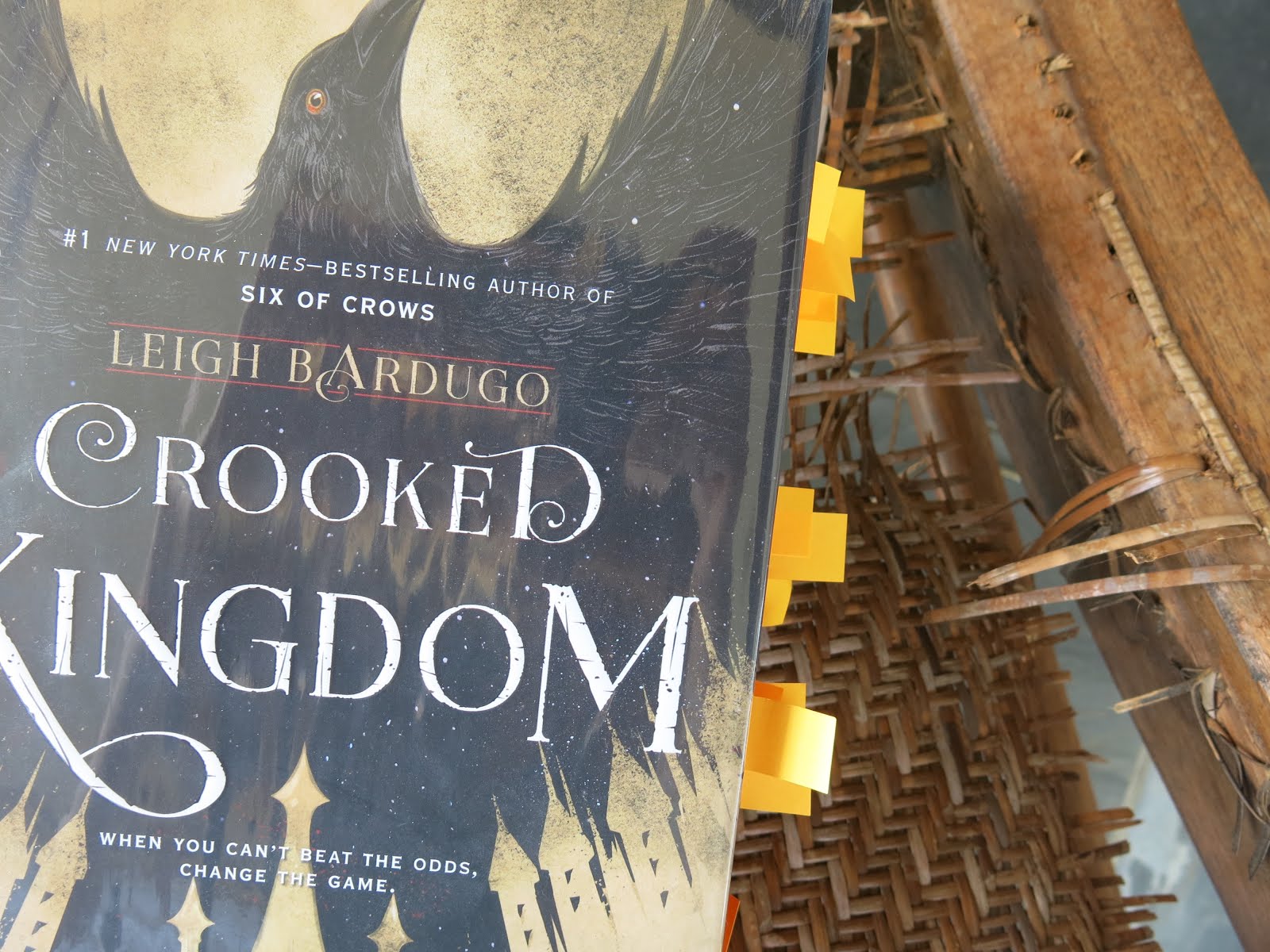 There Was Lost Love

Remember how much I adored both Kaz and Inej in the first book? If you don’t remember, or you haven’t read my review / comparison then let me tell you; I loved them. I loved them as badass crew members, as sad broken children and most importantly, as human beings (characters). In this book though, they just kind of fall flat. Kaz felt distant for a great deal of the book, and I think the character was trying too hard to fit into book#1 Kaz. Which just didn’t work properly. Like all people who go through life changing events, he’s been altered by the raid on the impenetrable fortress. Bardugo has been put in the awkward position of trying to show both this change, and trying to pander to the way that her readers see Kaz. It’s a good try, but to me, it just doesn’t come out all that well. Which is a pity, because there were some great lines by Kaz. Maybe they were just too good that the rest of the story felt a little like filler?

“The toughest mark is an honest one,” said Kaz. “Thankfully, they’re always in short supply.”

Inej, now she was a little better. I loved the emotion that she showed in the scenes between her and her kidnapper, they were completely and utterly human. They were completely and utterly heartbreaking, but I wont get into that too much (because spoilers and all that). She was tough, but I didn’t think that she was taking enough initiative. Perhaps the problem is that both of them were so focused on in the first book, they were so developed that it didn’t seem like they needed to add anything else to their character. The book seems to focus more on the growth of the rest of the characters, pushing these two into the background slightly.

“It isn’t easy for me either.” Her voice, low and steady, the voice that had once led him back from hell. “Even now, a boy will smile at me on the street, or Jesper will out his arm around my waist, and I feel like I’m going to vanish.”

“The Suli believe that when we do wrong, we give life to our shadows. Every sin makes the shadow stronger, until eventually the shadow is stronger than you."

He could see the truth, even if she couldn’t. Inej was stronger than he would ever be.

“Sometimes,” said Kaz, “a proper thief doesn’t just take. He leaves something behind."

Slowly, Kaz began to let the man’s legs slide through his grasp. "It’s terrible, isn’t it? Knowing someone holds your life in his hands."