Is She Crazy Or On To Something? | The Vault of Dreamers by Caragh M. O'Brien 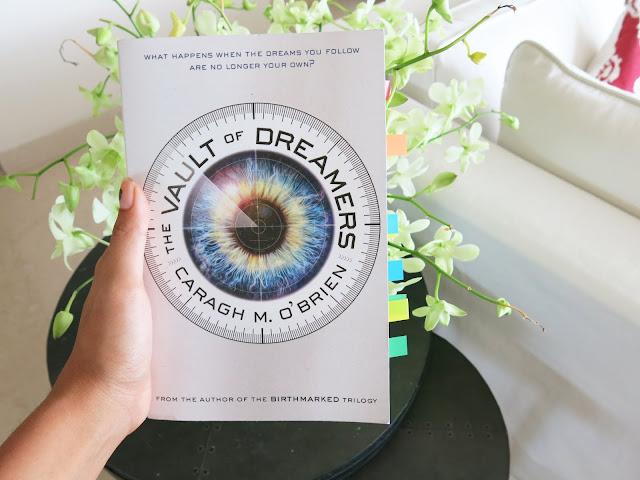 A reality show in school? I'm worried enough about my grades now without having to worry about what countless, unnamed people over the interweb think of me. Although being a teenager, we tend to think that everyone's watching us anyway. This just kind of brings it to life!


In fact, I adore the whole concept of it all. I've never really been into the whole sci fi thing in books, which is weird considering red rising is in my top three and I love sci fi tv shows. Yet I kind of adore this? It's probably the adorable little map in the front, which reminds me of the trashy but fun highshool simulators that I play used to play on my phone. I normally don't pay too much attention to maps, but this was adorable! The buildings were little blocks, and it wasn't overly complicated like some other maps are. Although for some reason, I pictured the school in Wales. Or at least a place that looked like Wales.

This may sound weird, but the book felt really good in my hand. It was one of those books where the spine doesn't bend when casually reading it (ugh) which meant you could flip through it easily, and the cover had little indentations in it. The good kind, where the title sticks out. Ooh the tiny little lines on the circle (?) stick out as well. It's actually a really pretty cover! The eyeball looks more and more realistic every second I look at it. Maybe I should stop before I creep myself out. 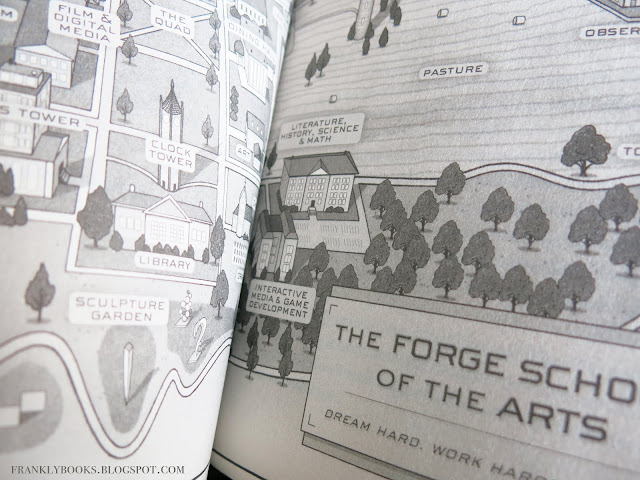 On to the characters, who I loved. True they could have been developed a little better. We could have spent a little bit more time with them, but I found myself loving them anyway. Especially Burnham (what a wonderful little human bean). In case you haven't read the books he's kind, techy and gets a little offended in the start of the book. I was a bit stressed at that point, because PLEASE START TALKING AGAIN. It worked out alright in the end, conversationally wise. Um, I don't think I'm going to say anything else but if you read the book and remember that he's my favourite character, you can probably judge how I'm feeling right now.

Janice was another character, although her writing didn't really do her justice. One little qualm I had about her was the fact that when Rosie first see's her, she's sees a super popular gorgeous girl surrounded by friend. When they become close, she's still super popular and gorgeous but there are barely any mentions of any other friends. Like???? Just because she's your friend now, doesn't mean that she's only allowed to have the same friends as you. It could be a little more realistic if there were some scenes when she was hanging out with some other people and Rosie has no idea who they are (I mean, I know there are only fifty students in total but come on).

Someone who's writing did do them justice was Paige. She wasn't really that close to Rosie (from what I can tell), but she managed to be both kind and absolutely terrible at the same time. She was vain but thoughtful. Although I can't really tell if they were friends or not, I mean Paige does some things for Rosie that close friends would do but??? They have like three scenes together, I'm not even being funny. Same goes for Henrik, who's only getting two sentences because he was that irrelevent. Even though I think they were supposed to be closeish.

I would do a paragraph about Linus, but I'm not quite sure how I feel about him to be honest. If he were a real person we would have a love-hate relationship, if we had one at all. He's in pretty much all of the plot points as well, so we get to see the most of him out of all the characters. Speaking of plot, this one was good. Not great, but good. Who thought it was a good idea to put the quote 'What happens when the dreams you follow are no longer your own?' on the cover? That doesn't give anything away or anything, it's not like it tells you the answer of what she's spending the whole book trying to find. Of course not.

It's like I've read a spoiler on the internet and now have an idea of what's going to happen. Except this time it's on the front page of the book and there's no escaping it. Literally, that was SUCH A BAD IDEA. Why would you do that? It would be enough to stop people from reading your book, because they think they know all of the answers? I mean, I kept reading because I wanted to see what happened to the characters, but there was nothing plot wise that really surprised me because I was able to guess most of what was going to happen (that Burnham thing made me sad though).

Near the end, I did begin to doubt whether she was sane or not, which was something that I loved. It made up a little for having little to no plot twists in the book. Honestly though, I was so confused! I mean, I knew the right answer deep down but it made me think a little.

Like I said earlier though, the idea was really really good. I rated it four stars because of the characters, the idea and the buildings. Er, not the ones on the map but that ones I imagined in my head. Maybe that's just me. Maybe you've imagined terrible, drab little buildings all the while I've been seeing slowly decaying master pieces. Anyways. 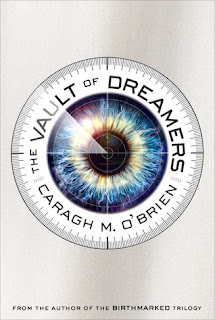 From the author of the Birthmarked trilogy comes a fast-paced, psychologically thrilling novel about what happens when your dreams are not your own.

The Forge School is the most prestigious arts school in the country. The secret to its success:  every moment of the students' lives is televised as part of the insanely popular Forge Show, and the students' schedule includes twelve hours of induced sleep meant to enhance creativity. But when first year student Rosie Sinclair skips her sleeping pill, she discovers there is something off about Forge. In fact, she suspects that there are sinister things going on deep below the reaches of the cameras in the school. What's worse is, she starts to notice that the edges of her consciousness do not feel quite right. And soon, she unearths the ghastly secret that the Forge School is hiding—and what it truly means to dream there. 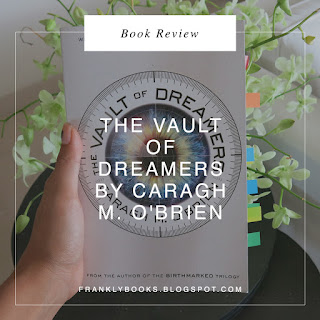 Have you read this book? If so, do you agree with the things I've said or do you have something you'd like to add? Feel free to comment anything about the book down below! I would love to hear what you thought about it. If you haven't read the book, do you want to? Or is sci fi / fantasy / YA not to your liking? What would convince you to read the book? free cupcakes? a gazillion dollars?
Email Post
Labels: book review