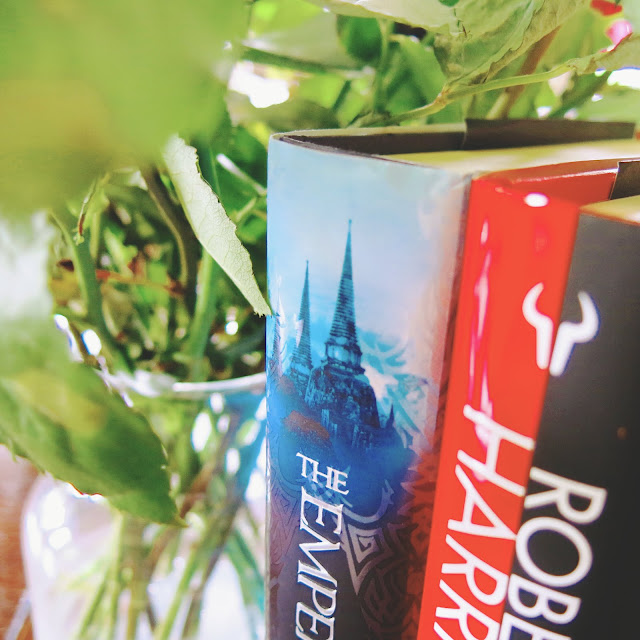 So I was meeting up with some friends and ended up dragging them around various charity shops on the hunt for something new to read. Along the way we also found a few teddybears, although (sadly) we didn't end up buying them. Oh well. Charity shops are one of the reasons that I love my summer holidays in England, we don't really have them back home so the ability to get cheap things while also helping people out is kind of ?? pretty damn cool. Also England has a load more books, even the books in shops are way way cheaper than the books in shops at home. 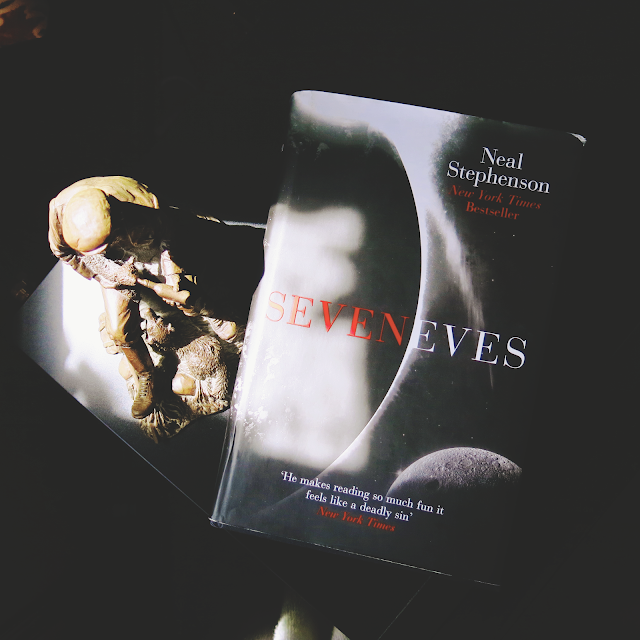 Seveneves by Neal Stephenson
What would happen if the world were ending?
A catastrophic event renders the earth a ticking time bomb. In a feverish race against the inevitable, nations around the globe band together to devise an ambitious plan to ensure the survival of humanity far beyond our atmosphere, in outer space.
But the complexities and unpredictability of human nature coupled with unforeseen challenges and dangers threaten the intrepid pioneers, until only a handful of survivors remain . . .
Five thousand years later, their progeny—seven distinct races now three billion strong—embark on yet another audacious journey into the unknown . . . to an alien world utterly transformed by cataclysm and time: Earth.
A writer of dazzling genius and imaginative vision, Neal Stephenson combines science, philosophy, technology, psychology, and literature in a magnificent work of speculative fiction that offers a portrait of a future that is both extraordinary and eerily recognizable. As he did in Anathem, Cryptonomicon, the Baroque Cycle, and Reamde, Stephenson explores some of our biggest ideas and perplexing challenges in a breathtaking saga that is daring, engrossing, and altogether brilliant.

(really really like this picture tbh)
I actually saw this in a book sale back home, but it was £2 more expensive (smh) and paperback. There was also a big uncertainty on whether or not I would like the book, I looked it up on goodreads and quite a lot of the reviews were less than favourable. But getting a goodish quality hardback for 50p? I'm not good enough at saving money to resist that deal #sorryglassjarthatIkeepallmymoneyin. So far I've read threeish pages and the moon is already exploding?? Damn, seems like it's going to be pretty good (or maybe I'm just deluding myself, but we'll see). 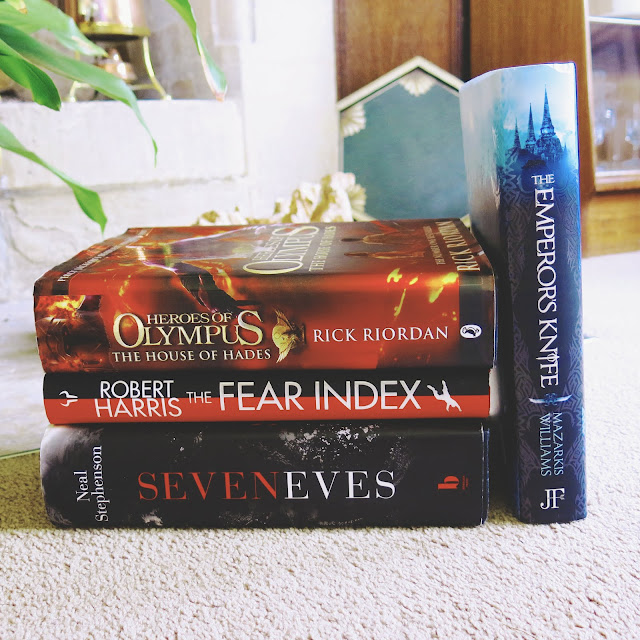 The House of Hades by Rick Riordan
At the conclusion of The Mark of Athena, Annabeth and Percy tumble into a pit leading straight to the Underworld. The other five demigods have to put aside their grief and follow Percy’s instructions to find the mortal side of the Doors of Death. If they can fight their way through the Gaea’s forces, and Percy and Annabeth can survive the House of Hades, then the Seven will be able to seal the Doors both sides and prevent the giants from raising Gaea. But, Leo wonders, if the Doors are sealed, how will Percy and Annabeth be able to escape?
They have no choice. If the demigods don’t succeed, Gaea’s armies will never die. They have no time. In about a month, the Romans will march on Camp Half-Blood. The stakes are higher than ever in this adventure that dives into the depths of Tartarus.

(I couldn't take a good picture of this, so have a picture of all of them. You can probably pick out which one it is.)
To be completely honest, I'm probably going to sell this on. Before you start lighting your torches and raising your pitchforks,  HEAR ME OUT! I've actually got this book, although the hyperion version of it yet I still haven't read the first Percy Jackson series. Why you ask? I literally can't find them in the library anywhere (help) and I really don't want to read it on my computer because it hurts my eyes. So I think I'll try and get those books first before trying the Heroes of Olympus. 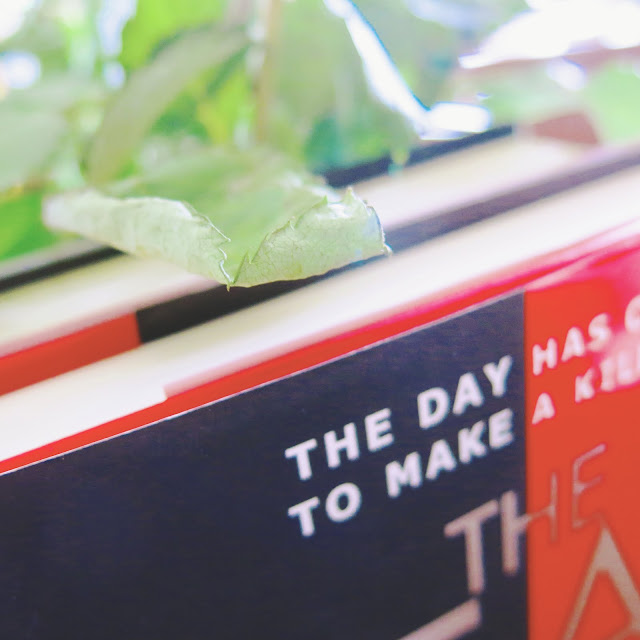 The Fear Index by Robert Harris
His name is carefully guarded from the general public but within the secretive inner circles of the ultra-rich Dr Alex Hoffmann is a legend - a visionary scientist whose computer software turns everything it touches into gold.
Together with his partner, an investment banker, Hoffmann has developed a revolutionary form of artificial intelligence that tracks human emotions, enabling it to predict movements in the financial markets with uncanny accuracy. His hedge fund, based in Geneva, makes billions.But then in the early hours of the morning, while he lies asleep with his wife, a sinister intruder breaches the elaborate security of their lakeside house. So begins a waking nightmare of paranoia and violence as Hoffmann attempts, with increasing desperation, to discover who is trying to destroy him.
His quest forces him to confront the deepest questions of what it is to be human. By the time night falls over Geneva, the financial markets will be in turmoil and Hoffmann's world - and ours - transformed forever.
(I forgot to take a proper picture of this, so heres a leaf with the tiniest bit of the book at the bottom)
So uh, my grandmother likes this author. So I thought I would try it out. Also the ability to track human emotions sounds pretty cool I might use it in my plan to takeover the world, it brings an interesting twist to a typical crime/mystery/thriller story. I also have a weird thing about having to pay an even amount, so I added this book to make my total £2 instead of the £1.50 that I would have paid otherwise. 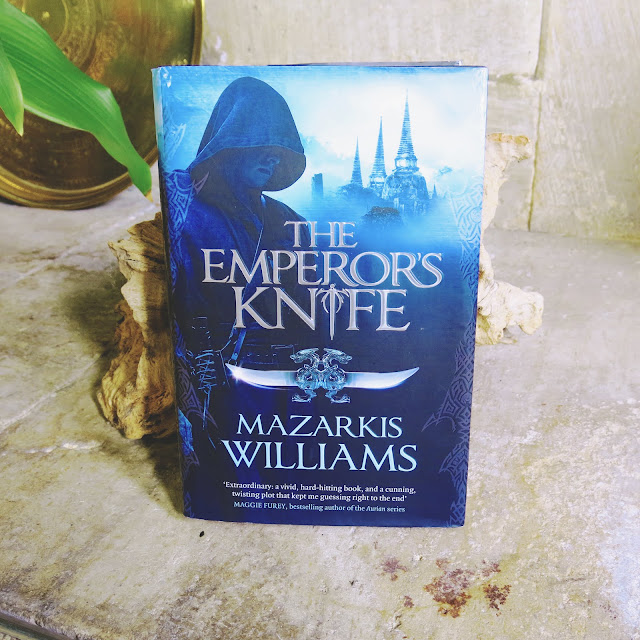 The Emperor's Knife by Mazarkis Williams
There is a cancer at the heart of the mighty Cerani Empire: a plague that attacks young and old, rich and poor alike. Geometric patterns spread across the skin, until you die in agony, or become a Carrier, doing the bidding of an evil intelligence, the Pattern Master. Anyone showing the tell-tale marks is put to death; that is Emperor Beyon's law...but now the pattern is running over the Emperor's own arms. His body servants have been executed, he ignores his wives, but he is doomed, for soon the pattern will reach his face. While Beyon's agents scour the land for a cure, Sarmin, the Emperor's only surviving brother, awaits his bride, Mesema, a windreader from the northern plains. Unused to the Imperial Court's stifling protocols and deadly intrigues, Mesema has no one to turn to but an aging imperial assassin, the Emperor's Knife.
As long-planned conspiracies boil over into open violence, the invincible Pattern Master appears from the deep desert. Only three people stand in his way: a lost prince, a world-weary killer, and a young girl from the steppes who once saw a path in a pattern -- a path that might save them all.

This was actually the first book of the lot that I picked up, to begin with I was only planning on get this one because it had a sticker that said £1.50. When I realised that it was only 50p, I ran out to get a few more! The reason I was going around thrift shops in the first place (I literally went around all of them, we did a full circle) was because I'm currently on holiday and have a craving for fantasy. I don't have any books over here and Game of Thrones just finished sad face. So I bought this. I haven't read any of it yet, but the cover's pretty.
Email Post
Labels: haul