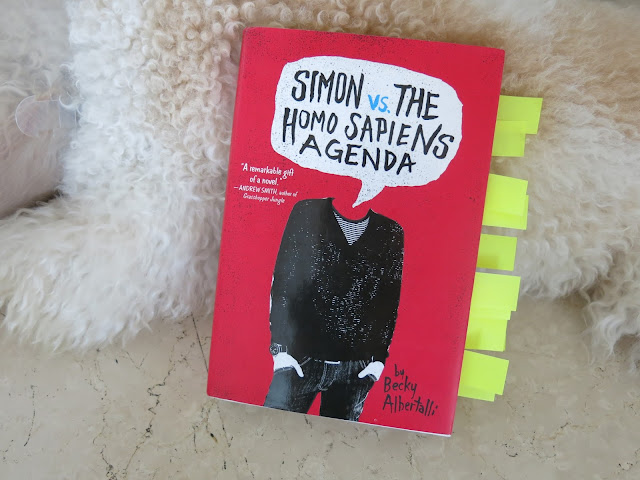 
Sixteen-year-old and not-so-openly gay Simon Spier prefers to save his drama for the school musical. But when an email falls into the wrong hands, his secret is at risk of being thrust into the spotlight. Now Simon is actually being blackmailed: if he doesn’t play wingman for class clown Martin, his sexual identity will become everyone’s business. Worse, the privacy of Blue, the pen name of the boy he’s been emailing, will be compromised. With some messy dynamics emerging in his once tight-knit group of friends, and his email correspondence with Blue growing more flirtatious every day, Simon’s junior year has suddenly gotten all kinds of complicated. Now, change-averse Simon has to find a way to step out of his comfort zone before he’s pushed out—without alienating his friends, compromising himself, or fumbling a shot at happiness with the most confusing, adorable guy he’s never met.

This book was one of the most adorable things I've read this year. Seriously. I spent the next few hours with a smile on my face due to the fluffy ending of this book (if that's not normal, then please ignore the last sentence). But yeah, it was cute asf.
In the beginning I wasn't sure if it was my type of book, maybe it was a bit too slow or nothing was really happening. But whatever it was, it made me contemplate putting this back onto my shelf. Maybe to be picked up again in a couple of months when I have nothing to read. Who knows. But is this is you, trust me. It gets better.

All of the Amazing Things:

1. The way that Simon was portrayed was so damn real. I personally don't know any boys who speak in the way he does, but I know plenty of girls who do. This just made the book so much more real to me, because I can actually picture the expressions, the tone etc.

2. "I mean he is a real junior at Creekwood. I know that. But in a way, he lives in my laptop." Truer words have never been spoken. There's always going to be a sort of detached communication between people online. Not quite sure if this has any relevance whatsoever but um, yeah.

3. There was a huge emphasis on people being a house (?) and not being able to see what they were actually thinking or feeling. Which I think is so cute because Simon realises that he does not in fact know everything and everyone. He gets to kind of discover the world a bit more in this book, and us along with him. "You never really know what he's thinking. But I have this theory that Bram's probably really funny in his own head." There's something about that line that's just so damn cute. Ugh.

4. "People are shameless when it comes to cake." Hell yeah we are.

5. Nawh people sticking up for each other and holding down the fort. How adorable is that? There were such nice (yes I'm using the word nice, hopefully there are no English teachers reading this) people in this book and it just kind of lifted my spirits.

6. Nora is a precious ball of fluff and I'm keeping her. That is all.

7. "Why are you looking at me sweet one? I don't have any cookies." Um, this just reminded me of how I act around my dog. So I thought I'd put it in here.

8. Eyeliner on boys? Um yes please, sign me up.

9. Blue being selfish and not telling Simon who he is. Now wait, let me explain. To me, it just seems to add a whole dollop of realism to the book, he's been quiet about it all the time so what makes you think he's just going to announce who he is because Simon wants him to? Being anonymous is usually for a reason (just ask trolls in the YouTube comments).

10. How adorable Simon is when he's drunk. I'm not encouraging drinking but damn Simon needs more drunk memories, because the ones we saw in the book are so effing (don't judge me) adorable.

I'm doing this because Simon is supposed to have known one of his friends since they were four. He was supposed to have known another one for six years. But I can't see any of that. So here's a list of people he seems the closet with, even though the book says otherwise.
1. Blue (they literally don't know each other)
2. Abby (they've known each other for like, five months? but they're still the closest irl relationship)
3. Leah (six years)
4. Nora (his sister so...)
5. Martin (um, he's blackmailing simon)
6. Cal (they have drama together)
7. Taylor (they also have drama together, it's one class damn it)
8. Nick (they've known each other since they were babies?)
9. Garret (they sit on the same table, literally everyday)
10. Bram (who?)
11. Two other random girls that I've forgotten the name of (they also sit on the same table as him everyday. yet they're interchangeable, his words not mine, and I've completely forgotten about them)

I got this at a quarter of the retail price. My friend and I were rummaging through the Salvation Army and ta daa. I also bought Vitro by Jessica Khoury (hardback as well agh), so if I write a review on that I'll limk it here. Unless I forget. I'll probably forget.

Would I recommend this?


have you read this book? if so what did you think? maybe you really want to read it but haven't had the chance. did you adore it like me or did you think something was lacking?